Watching reports on the recent Hurricane Irma reminded me of the time I monitored the earthquake in New Zealand so I thought it would be good experience to share for awareness of natural disasters. I guess I knew to always expect the unexpected when travelling but encountering a natural disaster was definitely not on my list! I was totally unprepared and thrown off by the suddenness of the earthquake. 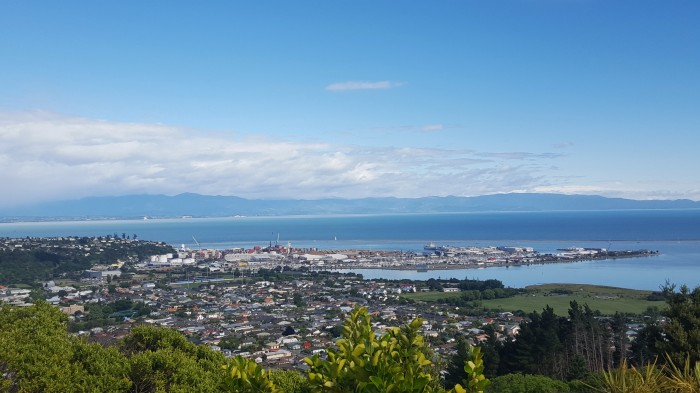 That long shadow at the back is actually part of Abel Tasman National Park, taken from Nelson.

This earthquake happened on 14 November 2016 (NZDT) just minutes after midnight. It was later reported to have a 7.8 magnitude and had a relatively shallow depth of 15km. The epicentre of this earthquake was somewhere in between Culverden and Kaikoura on the South Island. This was one of the largest earthquakes that had happened in New Zealand. 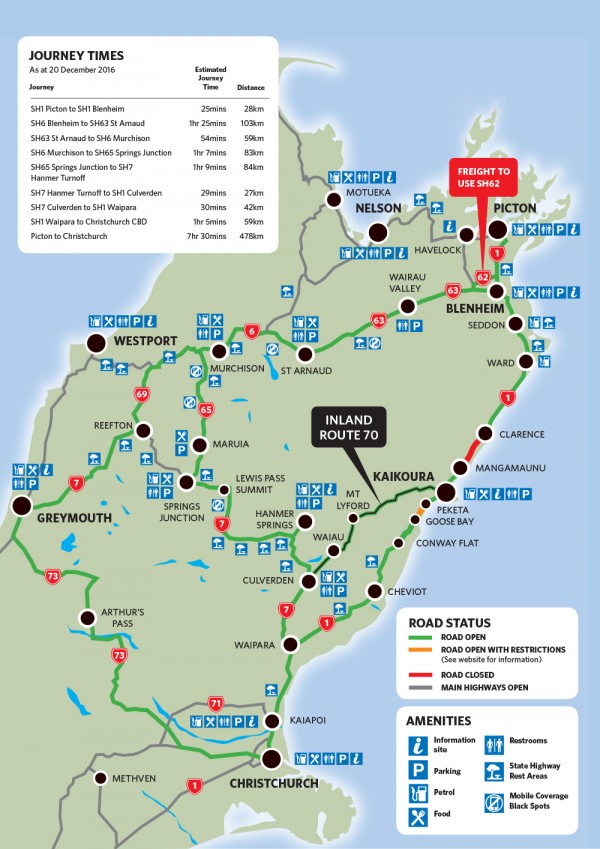 The epicentre was in between Culverden and Kaikoura on the South Island. I was in Nelson then which was further north. The inland route 70 had to be used as some parts of the road around Kaikoura was damaged in the earthquake. (Source)

At that time, I was staying and working in a motel in Nelson which was close enough to the epicentre to feel some of the tremors. My room mate was already asleep but I was on my phone when I suddenly felt giddy and nauseated. In that split second, there was this noise all around me.

The shower door in the bathroom kept opening and closing on its own. The laundry room was below our room and I could hear tools knocking against each other. I could feel my bed banging against the wall as well. It was as if the building was on soft grounds and everything just swayed from side to side as the ground moved.

All these were happening very fast. In fact, I froze for a few seconds when it happened as I didn’t recognise it was an earthquake. My roommate, however, had the total opposite reaction from me.

She literally jumped out of bed, ran out of our room and down the stairs which was by the main road, barefoot. She ran out so fast that I had to run to catch up with her. There was no way I was staying inside if she was not there. Coincidentally another guest ran out with us and we stayed huddled as a group by the side of the road while waiting for the noise to die down. 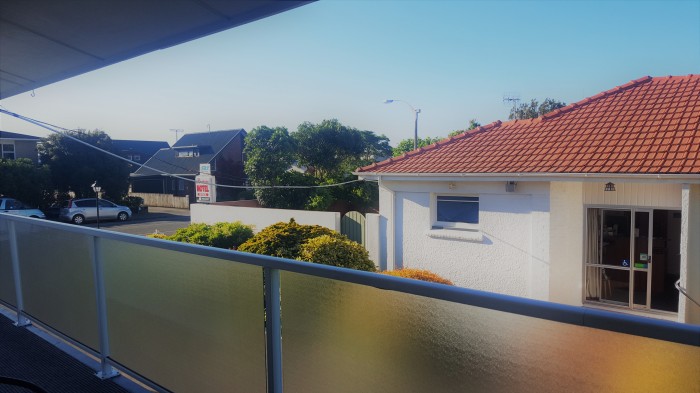 View from my motel room. The stairs were at the end of the corridor and right next to the main road.

The tremors were not really very strong in Nelson actually. The worse was the noise from all the shaking and banging because it just amplified our fear. I did end up feeling slightly sick during the tremor. Surprisingly, we were the only ones on the streets. No one even ventured out so it made us feel like we could return to our rooms.

And then another tremor started again. This time, we decided to stay in our room instead as it didn’t last long. Instead, we left our room door wide open as a precaution even though it was a little chilly in that early morning. We wanted to be ready to dash out if there were stronger tremors. With our door wide open, we immediately turned the television on to the news channel and hunkered down to contact our loved ones about it. My parents were especially worried so I tried to put on a brave face for them.

In truth, both of us were too scared of more tremors to go back to sleep. There was still a lot of aftershocks then, small ones but noticeable enough that you could feel the sway in the room whenever you felt sick, just as if you were sick at sea.

View of the town of Nelson with the surrounding hills and mountains. The river meanders right through the middle of this area.

While monitoring the reports online, we plotted ways to escape from our room in case of another big earthquake. It included the shortest way to get down (we thought to jump onto a tree in front of our room), the best way to survive an earthquake (we picked out ways to fit both of us under a small table in our room) and finally settled on choosing the different doorways we could stand under the next time we had a big tremor.

The reports online kept updating us about aftershocks every few minutes so we didn’t really feel safe enough to go to sleep. I eventually managed to sleep only after 2.30am. Luckily there were no structural damage to the property when we checked the next morning. We did keep feeling more aftershocks the next morning but I had work so I didn’t have to stay in the room that much to feel them. 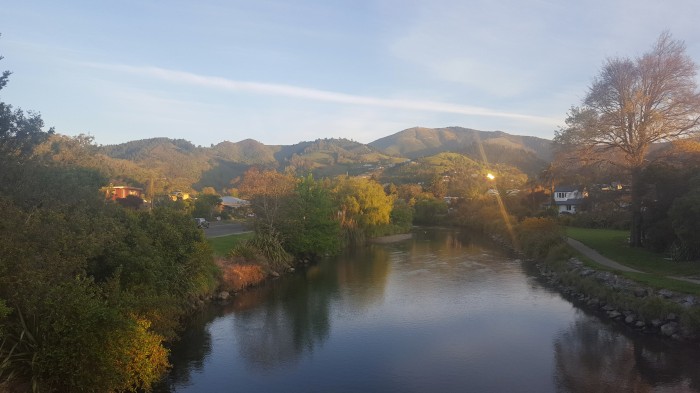 View of the river that runs behind the motel. I took many many walks around the river since it was very close by.

In a way, this was a rude awakening for me as I had no personal experience in a natural disaster. It showed me that I was not really prepared for an earthquake even though I knew of New Zealand’s susceptibility to such seismic activities. It shook me up a little but also made me learn a lot about safety while travelling.

In the event of an earthquake, please do not run out into the streets like I did. I realised that it is not safe to do this as there could be debris falling onto the roads or even roads breaking apart. So it is safer to stay indoors if you are already there, unless of course it is too dangerous to stay. Just make sure that you are also registered with your foreign ministry so that they can contact you during any emergencies.

For more details on safety precautions during earthquakes, please read this.

Have you ever experienced an earthquake? Or do you have any personal experience with a natural disaster? Please do share! 🙂

7 thoughts on “I Survived My First Earthquake in New Zealand”