Getting to Lake Tekapo was easier said than done when you are a newbie driver. It’s harder still when you run into an unexpected encounter on your drive there. Thinking back, the day started quite ominously with a grey sky and gloomy weather. Navigating the roads from Christchurch to Lake Tekapo, I followed the long line of cars headed the same way on the  highway. There wasn’t anything much special about the drive there, much of the scenery was covered in rain and foggy weather. 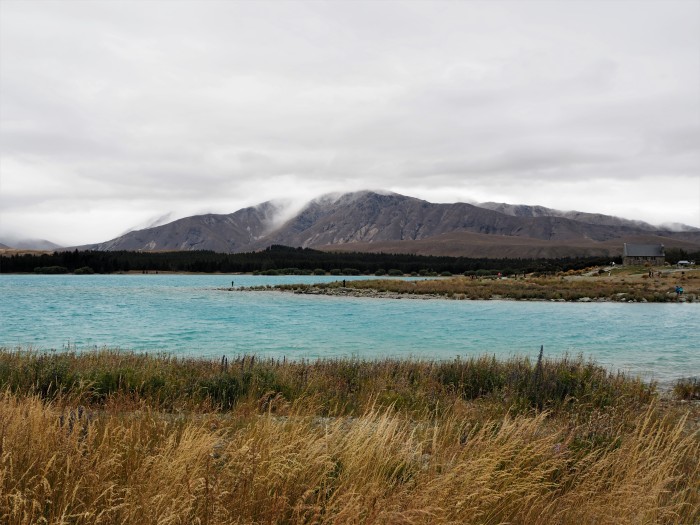 Playing around at Lake Tekapo, the color of their waters are bright turquoise blue due to the glaciers around it.

The drive to Lake Tekapo from Christchurch took me about 3 hours. As I got closer to the lake, you could see the landscape slowly changing. As you wind your way through the highway, it opened up to a more scenic drive. Rather than meander through shades of grey, I could see pops of colour on the mountains and surrounding hills.

I started to pay more attention to the surroundings, as misty as it was then. The colours caught my attention with the beautiful wild flowers lining the road casually, the openness of the area, they were just begging me to stop. I chose to stop with the intention to take photos. The slight drizzle, though, deterred me so I decided to make do with lowering the window and taking it from inside the car. Photography skills hack 101, yeah? 😉

Done with taking photos, I rolled the window back up and started down the road again. As I moved along, a signal went off in the car, telling me something was wrong. As a newbie driver, I wasn’t good at identifying this error. Thinking I was driving too fast, I slowed down a little but there were cars coming up behind me so I sped up again when the sound seemed to have disappeared.

Mists covering the mountains along the way to Lake Tekapo. I had stopped to take a photo of this just before the incident happened.

I was just a little bit further down the road. As I was approaching a bend, the sound came on again. I didn’t want to worry about the car stalling on a bend so I stopped by the side of the road again and decided to make a more thorough check of the car. Sure enough, I caught a glimpse of a signal in the middle of the car’s dashboard. I didn’t catch this signal lighting up earlier as I was focused on my side of the dashboard only.

Curious, I leaned over and realised that the seat belt sign was on indicating that someone’s seat belt was off. Now, I can reassure you that my seat belt was on the whole time and I never took it off during the whole drive. As I was processing this thought, it occurred to me that this signal was not for the driver’s seat but for the passenger’s seat instead.

Horror came to me when I had a crazy thought. Could it be? Did someone else…try to hitch a ride with me? 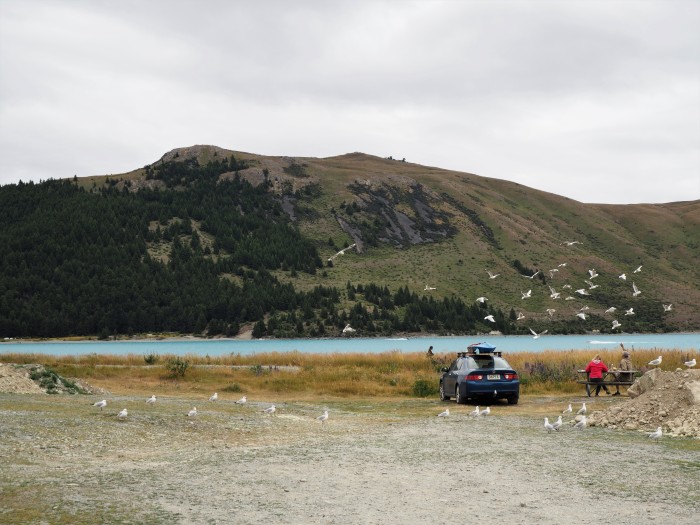 Best view for a picnic by the lake, other than the pesky birds waiting for your food, of course!

I didn’t want to think too much into it because I didn’t want to scare myself. I just reached over and put the seat belt on for whoever was in my passenger seat and the signal was suddenly silenced. I secretly hoped that the signal would return in hopes of reassuring my suspicions.

I made myself move off and continued my way to Lake Tekapo. Trying to drive the bendy roads while maintaining a speed to keep the long line of cars behind me soon occupied my mind and the thoughts of this encounter escaped me. The beauty of the lake also captured my attention (despite the grey weather). I soon forgot about the incident as I wandered around Lake Tekapo taking photos.

There were so many of these wild flowers everywhere, they were so pretty!!

Honestly, Lake Tekapo was really just that. A small row of shops and cafes and the lakeside. The cafes were a little bit pricey for my liking and crowded with visitors. Combined with the limited parking area, I chose to move on to Lake Pukaki instead, about an hour drive away from Lake Tekapo.

Before I left Lake Tekapo though, I remembered to take the seat belt off on the passenger side. I wanted to see if it could have been a technical problem with the car. But nope, nothing happened. Nor did the signal come on again during the rest of my drive back. I had the car for 2 days and that was still the only time the seat belt signal came on.

Coincidence? Or not? Hmm…I’ll leave it to you to decide instead…😉

Look who I found playing in the waters at Lake Tekapo!

What do you think? Yes or no? Would love to know your opinion on it. 🙂

5 thoughts on “My Ghostly Encounter while Driving to Lake Tekapo, New Zealand”