You know how they always advise us not to hike alone on isolated paths? Well, I definitely found this out the hard way when I was in Shirakawa-go in Japan. Pair this together with someone who has a very wild imagination and you have a scene right out of a thriller flick or so I imagined.

Shirakawa-go is actually one of Japan’s UNESCO world heritage site. It is famous for their traditional gassho-zukuri farmhouses, some of which are more than 250 years old. These traditional farmhouses have steep thatched roofs because it snows pretty heavily in winter seeing as it is located within a remote mountainous region.

I was walking around the village looking for a particular lookout point. Most of the beautiful photos of this village was taken from way up high so I was determined to find the exact same spot for me to take photos.

How it’s supposed to look like from the lookout point. (Photo: Wikipedia)

Walking to the end of the village, I realised that I would have to make my way up a slope to get there.

But wait, I found that the slope was covered in deep snow.

The path looked dark and menacing and untouched. Tall trees lined the side and a thick wall was on the opposite side. There was not much footprints in the snow.

I pondered for a moment and decided to continue on, boosted by thoughts of beautiful photos.

As I stepped onto the pathway, snow slowly fluttered around me. It was such a beautiful moment, seeing snow coming down all around me.

Walking through deep snow was a slow process. It was literally lift your foot, step, hope that I don’t step on any rocks or slip on ice and repeat. What seemed to be a 15 minutes walk up a slope was taking longer than expected. My breath got labored and I paused halfway through to catch my breath.

And then, utter silence.

Not even a single bird song. No rustling, no trickling sound of water anywhere.

I looked back at my footprints in the snow and I looked beyond me.

I could see no one else on the path.

The snow started to come down even harder.

AND I started to freak out.

“What if I get buried under all the snow and no one finds me until it all thaws?” was my thought. (Yes, I know how that sounds. I blame my wild imagination on this, it sounded like a coherent thought at that point of time.)

I had no one to get help from. So did I run back to the safety of the village to wait out the storm?

Nope, I trudged on.

Looking back, going back would have been the wiser decision. However, it had taken me almost 5hrs from Tokyo, with 2 train transfers and a bus ride to get to the village. I was determined to get to that lookout point and take my photo.

I tried to move faster, even through all the snow, huffing and puffing my way up.

Finally I was at the top.

I hurried to take my photos because it was snowing really hard at that point of time and I didn’t want to be stuck on that slope. I could still see no one around me and I was seriously scared.

So I went back down as fast as I could, following my footprints. 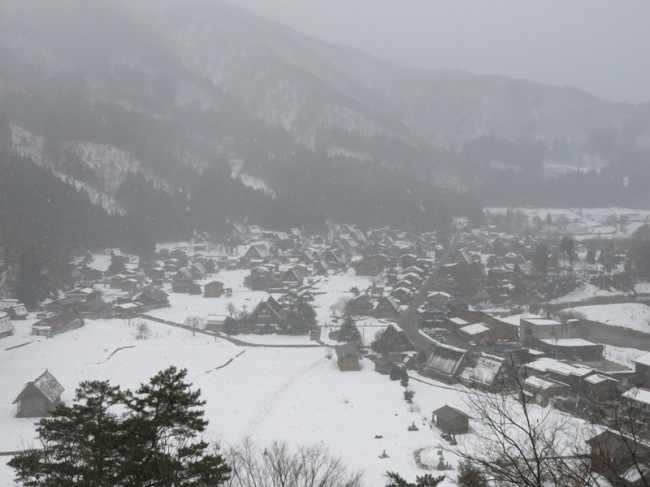 What I managed to capture after that long walk.

When I was almost to the bottom of the slope, I heard voices.

And I felt myself relax and slow down my steps.

“Ahh, civilisation. I am saved.”

Part of the slope. If you look closely at the top left, there are people at the lookout point.

12 thoughts on “The Slope of Terror”