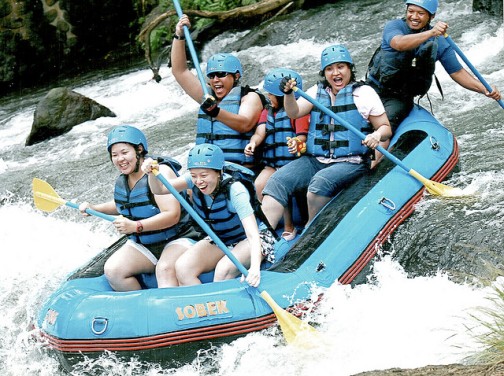 Often, people travel for pleasure, for a sense of adventure and discovery. In the midst of excitement and anticipation of these travels, the risks on holiday are usually given little thought. I too was that way until the day I almost drowned while river rafting in Bali.

The river that we have selected did not seem as fast as the other ones in Bali, or so the tour operator informed us. It was a last minute decision to do it, having just walked up to one of the many tour shops in Kuta and negotiated a price for our group of 4.

When we were brought to the riverside, we found that we were to share the ride with a few others. Our group ended up with 3 rafts, with the 4 of us split between 2 rafts. In my raft, there was just me, my sister and my guide.

The journey was to have taken 3 hours and we enjoyed every bit of it in the beginning. It was scary to go through the swells and swirling of the river but I felt confident since I was sitting inside the raft and could hold on to the sides whenever it got too rough. There were long stretches of river that was calm enough for us to just sit and enjoy the greenery.

What happened in the next moment though happened in a split second and could not have been more unpredictable. Even at this point of retelling the story, I can’t help feeling the anxiousness and helplessness of that moment and everything that happened then remains clearly etched on my memory.

My raft was trailing at the back of the other rafts when the second raft got stuck on rocks. My guide tried to maneuver our raft to the other side but the river had already pulled us in the same direction as that raft.

And just like that, both rafts collided. Being the lighter raft with just 3 people, my raft was pushed over the other one and turned over, spilling all 3 of us into the fast and raging waters.

In my mind, I could already have seen the collision coming or maybe I feared a collision may really happen. So my first thought was to actually get out of the raft since the water was only about thigh deep. I had my legs out ready to jump but what it did was to trap me under the raft instead when the raft overturned.

The time underwater was a blur for me, I don’t even remember how long I was underwater.

I remember trying to push the raft away from me but I had no strength because I could not find a footing on the river to push it up and away. I was trying to get on my knees to find a stable position but I kept being battered by the fast currents that I couldn’t get a proper grip around the raft.

I could feel myself panicking the longer I was underwater. I simply couldn’t find a way out from under the raft and thought that I was never going to. It started to be a struggle to hold my breath.

By a miracle, my hand managed to get in the space between the two rafts. I pushed my hand through and the next moment, I felt my hand being grabbed, pulling and dragging me out of the water and into the next raft. The guide from the second raft had pulled me out.

I was pulled into the raft, helped by the others there. I felt as limp as a noodle and collapsed in exhaustion. And then I realised my sister was missing and panicked again.

Was she trapped underneath too? I thought. I was ready to jump back into the waters to get my sister.

I then saw my guide holding on to my sister some distance away from the raft. She was without a helmet as it had come undone when she went into the water.

Took some time to just rest and process it. We then climbed back into that same raft and continued on our journey. I was a nervous wreck for the remaining time but I managed to hold it together until the end. Thankfully, no other adventures await me. I was happy to see the end of this long journey.

My guide later apologised to me. He told me that he had to decide between the two of us and chose to go after my sister because she was in a better situation.

I couldn’t help but feel bitter that he had left me to fend off for myself but I could understand his position in such difficult circumstances. I was definitely grateful that he went after my sister. I would have certainly been lost without her.

At the end of the day, I was grateful that both of us had survived. It was a bitter realisation that it would have been a sad day for my parents indeed to have lost both their daughters in one holiday. Instead, I returned home with only bruises and scrapes on my knees as a testament of my survival.

This has not stopped me from trying out other adventures on my holidays but it has certainly given me a different perspective. You can never be too prepared because anything can happen. A holiday can be full of fun and enjoyable moments but it can also be unpredictable and risky when you are on foreign lands. Instead, all you can do is enjoy life to your fullest.

Will I try river rafting again? Perhaps but definitely not anytime soon.

5 thoughts on “Near Death Experience in Bali”